Do you know who coined the term Diopter?

Most of us would have guessed it to be a physicist. But to our surprise, he was an Ophthalmologist. Yes, he was the pioneering eye doctor, Dr.Ferdinand Monoyer and it’s his birthday today.

He coined the term “diopter” as the unit of a lens, expressed as the inverse of the focal distance in meters.  It also means that the distance you would have to be if you have to read a letter of a particular size. After that, in 1875, The Congress of Ophthalmology of Brussels decided to use the diopter as an international unit of refraction, which is used worldwide in ophthalmology.

The optics of cameras, lenses which we use in our spectacles or binoculars or telescopes are defined in terms of diopters. Since diopter strength is based on the inverse ratio of the focal length, a 2 diopter lens focusses at 1/2 meter (1000/2=500mm), a 3 diopter lens focusses at 1/3 meter and so forth. A relaxed, healthy human eye has an optical power of 60 Diopters. Any modification in the structure and position of parts of the eye can make less or more than 60. This will make our vision blur and we require glasses. Those glasses will be aiding us with that extra diopters.

He also invented a chart to evaluate visual acuity, Monoyer chart, in which he managed to insert his own name. If you look at this chart closely, ignore the last row. Read all the first letters of the rows spell ‘MONOYER’ and last letters for “FERDINAND” from bottom to top. He introduced the chart at around the same time that Dutch ophthalmologist Herman Snellen developed his Snellen chart in 1862. There were multiple variations and improvisations to this chart.

Two years ago from now, on his 181st birthday, Google honoured him for his contributions by Google doodle. 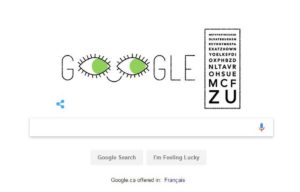