Before constructing a Visual Acuity Chart, we need to know and decide what kind of chart we want to construct. There are different kinds of charts for visual acuity measurement.

But based on construction they fall under two categories, Snellen and logMAR.

Visual Acuity Chart can be constructed based on 2 criteria,

The letters in the chart are called optotypes. 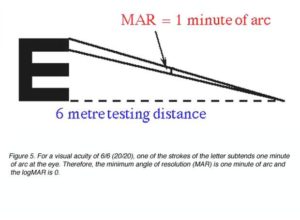 Snellen defined “standard vision” as the ability to recognize one of the optotypes when it subtends an angle of  5 minutes of arc.

For example, 6/60 means the ability to see an object only at 6 meters which should be normally seen at 60 meters. 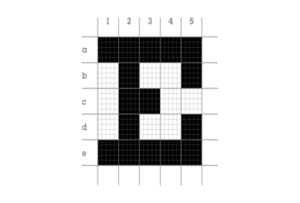 -For example, if we want to construct a 6/60 letter, then

Height: Tan 5′ = x / distance from the Optotype to the eye

The thickness of critical detail: As it is a 5 x 5 grid,

total thickness = 5 times the thickness of the critical detail.

– The non-uniform decrease in size of letters from top to bottom. 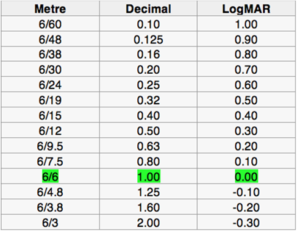 By using all these principles and the below-given values, Optotype size can be calculated accordingly.

*(Tumbling E and Landolt C are available in both formats

Optometric instrumentation  by David B. Henson