To understand the clinical application of Conoid of Sturm, we need to understand its basic optics.

In simple words, we can say ” Conoid of sturm is just a representation of how rays are refracted through two different powered meridians” (eg: a sphero- cylindrical lens). So, instead of one focal point, they form two focal lines.

“A geometrical configuration of light rays emanating from a single point source and refracted by the sphero-cylindrical lens. Also defined as a bundle of rays formed by an astigmatic optical  system consisting of a primary focal line (stermi’s) line, a circle of least confusion and a secondary focal line perpendicular to the primary” 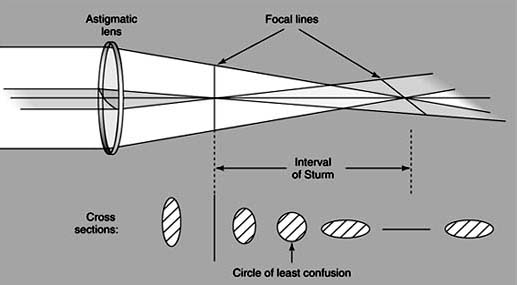 Let us see the optical effect of a Conoid of Sturm practically.[2]

Take a high plus cylinder lens(+10.00 or more with some cylinder) and focus the sun on the ground. At one interval you will see a thin line focused, at another, you will see another thin line 90 degrees opposed to the first. Now if the lens is held at a distance halfway between these two foci, you will see a little focused circle i.e circle of least confusion.